I enjoyed the shit out of this. I’ve seen a good deal of westerns. I haven’t seen nearly as many Clint Eastwood films as I should have considering I own a penis but I’ve seen most of the important ones besides Josey Wales which is on my short list of “Films I need to see RIGHT GODDAMN NOW”. I’ve seen a couple of modern westerns such as The Proposition and True Grit and honestly, Yuma is right up there with them as far as gun slinging cowboys go. I’m not throwing No Country for Old Men or Meek’s Cutoff in that list by the way film snobs. Those two films are vastly different than Yuma. The film had the obvious two stars but I ended up enjoying the supporting cast just as much. Alan Tuydk, Ben Foster, Logan Lerman, and the great Peter Fonda were all fantastic. Is it me or is there just always something creepy about Ben Foster. I can’t wait for his upcoming film Ain’t Them Bodies Saints because the guy is due for an unforgettable role. Also, there’s a random Wilson brother in this movie. Is it Owen or Luke? This movie came out six years ago you probably know by now. I liked that it didn’t have just straight action and unresolved character issues. The writing was good and if it wasn’t for a bit of a cheesy ending I would have given the film a near perfect rating but I’m sorry, the ending was just full of stinky cheese. Still a great modern western that I’ll consider adding to my collection if the price is right. 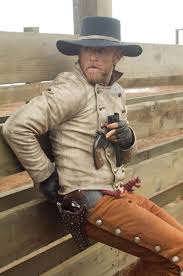