A disillusioned assassin accepts one last hit in hopes of using his earnings to restore vision to a singer he accidentally blinded, only to be double-crossed by his boss.

Am I an asshole? Am I an asshole for not liking this film? Look at those ratings. 8.0? 100%? I’m going to just assume that I’m a horrible person for thinking this film was one of the cheesiest things I’ve ever watched. I’m a bad person and you should stop reading. Seriously John Woo? SHRIMP HEAD?

I’ll be honest off the bat, I haven’t seen many Woo films. Growing up I had a steady dosage of Jackie Chan and Jet Li, but anything related to John Woo fell by the wayside. I’ve seen his American films but this was my first dive into his films with Chow Yun Fat. It started poorly.

First let me state that the police in this film are horrible. They may possibly be the most insanely inept squad of men I’ve seen in film. They let people get assassinated easier than whoever ran the parade in Dallas. Chow Yu Fat was sitting on a boat with a gun pointed at a very important man whom the police force KNEW could be assassinated and nobody spotted him. They were at a goddamn rowing race. There was literally a thousand people watching the water and they couldn’t see Chow Yun Fat with a bad mustache and a rifle. Then when a bullet blasted through his head, they covered him up and said he fainted. I could have spread that cheese on toast.

The whole film was cheese. The WHOLE film. Woo tried to portray serious emotion but when one of the characters is screaming over the loss of his buddy Shrimp Head, yeah you lost me. The movie also suffered from cliche action movie tropes such as endless ammo, endless villains, and endless times you get shot in the chest before you die. I guess I should be appreciating the action scenes and taking an 80s film for what it’s worth but I’m not going to do that. I hope Hard Boiled is better than this or I’m not even going to touch John Woo again.

Wait, Red Cliff was fucking awesome. This must have just been a mistake. Also, I know get the John Woo dove jokes now. I have arrived to that level of movie reference. 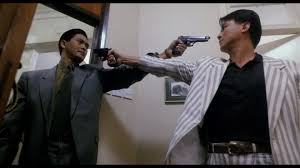