April, 1945. As the Allies make their final push in the European Theatre, a battle-hardened army sergeant named Wardaddy commands a Sherman tank and her five-man crew on a deadly mission behind enemy lines. Out-numbered, out-gunned, and with a rookie soldier thrust into their platoon, Wardaddy and his men face overwhelming odds in their heroic attempts to strike at the heart of Nazi Germany.

Writer/Director David Ayer has had an interesting career so far. We have seen his brilliant times with the writing of Training Day and shit, even U-571. We’ve also seen his horrible times with Sabotage, Harsh Times, and the absolutely atrocious SWAT. I’ll never forget a character in SWAT, before blowing his brains out, looking toward Samuel L. Jackson and delivering this gem of a one liner…”Goddammit Sarge!” If you’ve seen the film you know what I mean. I can’t look at Josh Charles the same anymore. Ayer is obviously talented but I feel like he slips into a bad crime novelist whose books frequent airports from time to time. Training Day was obviously amazing, but besides End of Watch, his work has been mediocre at best recently. Fury, was ultimately a frustrating film with some moments of brilliance. The likes of a full length film with no glaring problems might be behind Ayer for now.

There hasn’t been a film dedicated to tank crews that I can remember. You see the air force, ground troops, hell, even fighter pilots highlighted in films, yet until now nobody has highlighted the work that tank crews did during WW2. For the most part, it was almost a death sentence. Like flamethrowers in Japan, a tank is like a huge target for enemy fire. You’re not going to last long unless you take the tank out FIRST. US tanks were also poorly made compared to superior German Tiger tanks. US tanks were slower and would routinely be taken out by enemy artillery. In short, tankers didn’t live long. This crew has though. Brad Pitt and company have been together for years and when a newcomer (Lerman) comes along, he needs to be broken in fast or else he’ll risk the lives of the entire crew. We’ve seen this before with Ayer. A newbie comes into the world of hardened veterans and has to see the horrors of the job before he can become one of them. Honestly, my interest in this film wasn’t the story. I’m a big WW2 fan and the concept of a film dedicated to tank crews scratched my history itch.

I had problems with the film. For one, the music in the film was just overbearing. The film was intense enough. I didn’t need a blaring orchestra to remind me that I should be in suspense. Somehow, the death and firebombs going off on the screen did it for me. It was distracting. I also had a problem with a few scenes that not only took the pace of the film and brought it to a grounding halt, but it also didn’t make a lick of sense. The biggest offender of this was the breakfast scene with the German girls. The only thing I liked about this was the performance of Shia LaBeouf but we’ll get to more of that soon. Jon Bernthal tries WAY too hard to be a crazy person and the film decided that rape didn’t exist in War and that every German girl who was being FORCED to cook and serve these troops would also sleep with them. It was insulting. The film had some of the most violent scenes in a war movie since Saving Private Ryan but they had to sprinkle glitter over these men when they interacted with women. It was just odd. The whole scene with the younger girl and Lerman was just a set up to what happened after they exited the house. It was cheap and amateur. The final scene was also completely nonsensical and dragged out. A particular scene, after the battle, after literally hundreds of people died, was laugh out loud bad. Those of you who have seen it will know what I’m talking about.

So, what was good? Well, the sound design was top notch. I expect nominations for that team because each round and explosion sounded like the real thing. There were two tank battle scenes that REALLY stood out thanks to amazing sound design and very intense interior shots of the tank crew in action from inside the tank. I was on the edge of my seat for these. The camerawork was also overall pretty great. The opening scene looked like a leftover scene from War Horse. Yes David Ayer, I just compared you to Spielberg. You can relish in that. The acting was also top notch from Pitt and LaBeouf, specifically Shit (I’m leaving this typo in because Shia would find it funny). These are the roles that the kid needs to be doing. He needs to take this crazy persona of his and stick it into his acting. He was a marvel in this film, showing an unbelievable amount of range. His character, Bible, was a God loving Christian outside of the tank, and a ruthless gunner inside. LaBeouf handled it wonderfully. I was very impressed. Pitt was also very solid as the leader although he really shined when interacting with LaBouf and Lerman. The rest held their own with Lerman giving a good performance and Pena and Bernthal just kid of slogging through.

The film was worth a ticket. It was a bleak look into war that didn’t stop when things got too hectic, unless German lasses were involved. There were some intense scenes and a whole storyline that was devoted to tank crews but there were some serious flaws in the logic behind some of the scenes in the film. It also serves as proof that Shia LaBeouf is still a talented actor when given the right role. 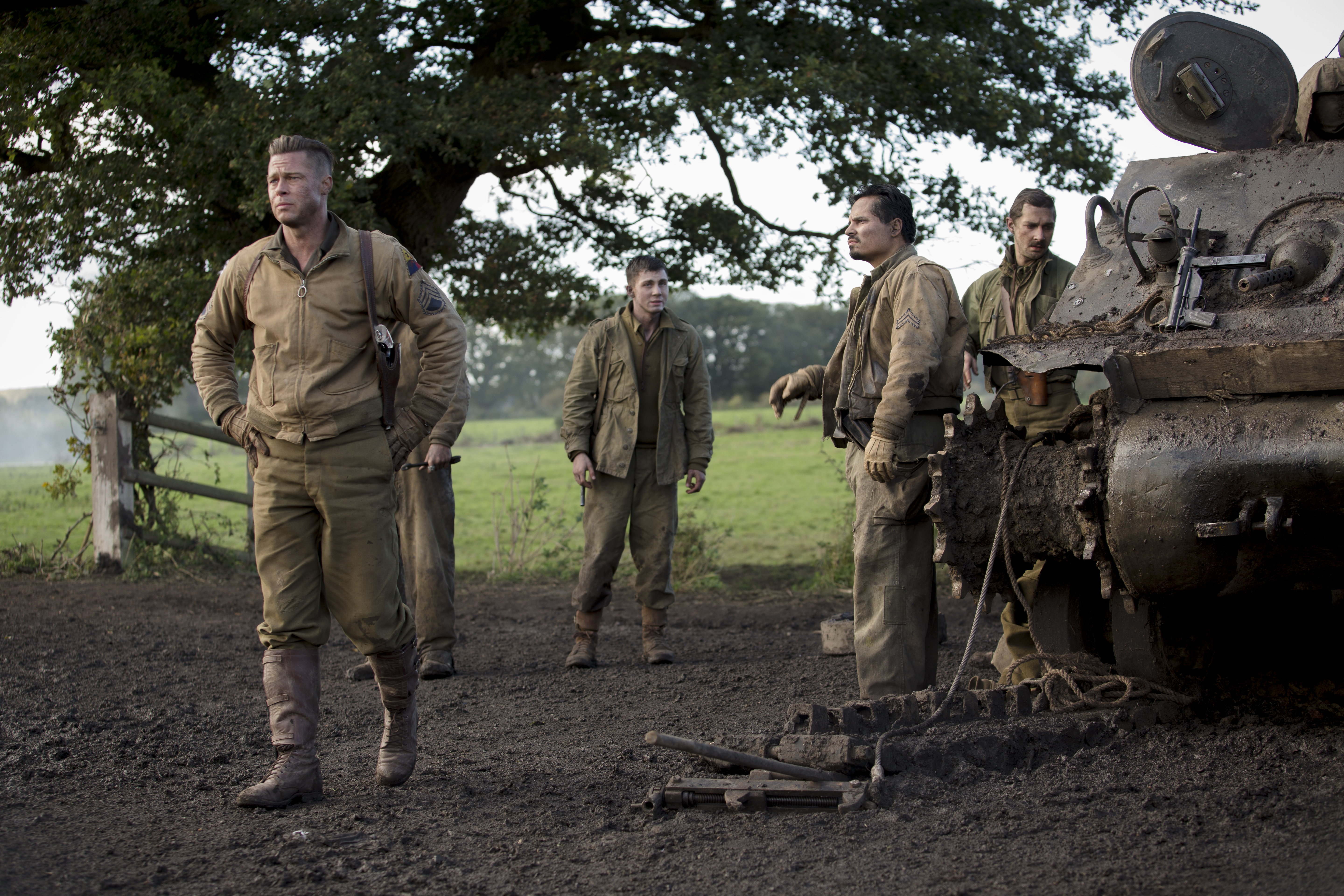