A grieving couple retreat to their cabin in the woods, hoping to repair their broken hearts and troubled marriage. But nature takes its course and things go from bad to worse.

So tonight I sat down to watch “Antichrist”, a film which I have been putting off for some time now. Why was I putting it off? Well, Lars Von Trier makes a living out of tearing my heart out of its chest, spitting on it, and throwing it overhand back into my rib cage without any form of courtesy or apology. My first exposure to the man was “Dancer in the Dark”. What a wonderful film to start what would be an on going love affair with the man. I’ve always been drawn towards music and film that go against the grain. I like when people think out of the box and present us with something new. I also appreciate going to dark places where most filmmakers are afraid to go in fear of alienating their audience. Lars Von Trier doesn’t give a shit. He’s going to make his films the way he wants to. The man is a mad genius. He’s constantly pushing the envelope to new heights and I’ve always appreciated that. While my admiration for him is still as high as it has ever been, this film unfortunately did not further heighten my opinion of the man. This was my first Von Trier miss.

After viewing the film I did a little research and found out that Von Trier was going through a hell of a depression when writing/making this film. Holy shit did it show. The story revolves around a couple who had recently lost a child because they were too busy having loud sex in snowstorm. I had no idea Willem Dafoe was so well endowed. No I do. Thanks Lars Von Trier. I had always wondered what the mans package looked like and you have delivered on all fronts. The couple soon realizes that they are in a world of misery and Willem Dafoe’s character, who is a licensed therapist, decides that they should both go into the woods and live in a cabin for a few days. This is where the horror begins. This is where I stop describing the plot.

If you have ever had a messy room before then you’ll understand what I mean when I say this film is messy. All the parts of a coherent story line are in the film except they are in places that just don’t make much sense. I lost a lot of the surprise and meaning of the film because I was being bombarded by random acts of supernatural occurences involving animals and plants. The film is about the evil of nature. I understand this. I understand it more since the film ended however. During the film they hinted at it a couple times but eventually went into full on “spelling it out” mode by the films end. I would have appreciated a little more subtly, by which I mean letting me figure it out by myself, towards the end of the film. I didn’t get that. Instead I got some very disturbing images that I’m not going to be able to scrub thoroughly enough from my brain. I’m am going to have nightmares tonight and I don’t even own a vagina. Again, I’m not going to explain that.

Going through depression is hard. I’ve been there. Lots of people have been there and I’ll venture that most of them have had it worse than me. I was willing to stick with the film during the first half where we see the stages of grief in full play. Once we took our trip to the woods however, the stages of depression suddenly jumped a few gears into full blown lunacy. I was honestly taken aback by it. It was like a light was switched and all of a sudden we have a grotesque horror film. Perhaps this was intended? I know serious depression comes in waves. Sometimes these waves come in with more intensity as time goes by. If Von Trier was going for that then I can say I honestly get what he was trying to do albeit he decided to do so in an odd fashion. Again, subtly would have been nice here.

A lot of people compare this film with “Melancholia”, which is a film that I loved. I get this. Both deal with depression and it’s different forms. “Melancholia” however was a slow burning descent into the illness where “Antichrist” was like a slow jog into depression that turned into a dead sprint to hell. Insanity finally turned its ugly head and I found myself just wondering where my slow paced character study went. Now, this isn’t to say I hated the film. I didn’t. I just had major issues with the foundation of the film.

One thing about Von Trier is that he is incredibly gifted behind the camera. Like all of his films, the cinematography is gorgeous. His usually opening of a slow mo prologue was one of the prettiest intros I’ve seen in a long time except for that wonderful shot of Dafoes dong. I could have done without that. The film was dark. There were very few colors involved and I think this was intentional given the nature of the film. The acting was also very good. Both the leads had great chemistry and while they were trying to sex each other during about half the film, the other half was a great back and forth of body language and eye movement. Gainsbourg deserved her award. Hell, I’d say that any actress that has to work with Von Trier deserves an award after reading so much on what he puts them through. I guess that is the mark of a great director though. Alfred Hitchcock was notorious for destroying the souls of his actresses and now I guess Von Trier has grabbed the torch.

Overall I can’t say I’d watch the film again. I’m glad I got it out of the way but disappointed I didn’t enjoy it nearly like I enjoy his other films. The insane train that the film turned into was too much for me and eventually I just wanted to get off it. Also, if you have genitalia of any kind, do not watch this film.

Three teenagers carry out their lives under the close watch of their parents. They have never been off their property and know nothing of the world.

This is probably one of the strangest and most disturbing films I’ve ever seen. I mean, I’ve seen some pretty far out horror films and I’m a huge fan of Michael Haneke but this was just bizarre and crudely funny in a way. I’m not quite sure what is wrong with my taste in film to where I liked a film like this so much. The funny thing is, I don’t think I can watch it again. It was such an uncomfortable watch but like a car accident, just damn near impossible to turn away from.

Lanthimos directs a completely unflinching tale of family conditioning at its most nightmarish. I really shouldn’t go into the plot of the film too much because it’s really something you need to experience for yourself but the story revolves around a family of five and the way the parents raise their children. Let me just say that these parents make the Lohans and kiddie pageant people look like saints. It’s not even like they are cruel or abusive…well, okay, I have no idea what they are. All I know is that it’s so uncomfortable to watch that I just know it’s evil.

The film holds nothing back. Just when you think they are going to cut the movie goes from PG-13 to OH GOD NO in seconds. I’ve never really seen something like that. It just makes me believe that Lars Von Trier’s Nymphomaniac is most likely going to make people explode. I can see a little old lady walk into that thing and just come out crying, wishing somebody would turn back time to wear they weren’t allowed to show people kissing on television.

Don’t get me wrong, there is a lot of meaning behind Dogtooth. Obviously conditioning is a main theme and focal point. I mean they didn’t have to show this but they actually had worked dog trainers into the story just to drive that theme home. Plato’s “Allegory of the Cave” also popped into my mind a few times as if you watch the film you can plainly see draws cues from the old man. AHHH I WANT TO SAY THINGS BUT I CAN’T.

Just watch the film. By yourself. This isn’t a date movie. Put the kids to bed. Prepare your mind for “WHAT!?” type ideas. Just watch it. It’s fantastic.

This was one of the toughest films I’ve ever had to watch. There are a lot films that have fallen into that category such as Requiem for a Dream or basically anything from Lars Von Trier but this is a different monster altogether. Hungarian auteur director Bela Tarr apparently claims this is his last film and if it is I can’t imagine what kind of future he is striding too. This film is one of the most existential, bleak, and dark films I’ve ever seen. It is certainly the most demanding on the viewers endurance as there really isn’t much dialogue besides a brilliant monologue in the middle basically shouting how dark and bleak human existence is. There are only 30 shots in the entire film which has a run time of 154 minutes. 30 shots! Each one of these shots showcases the grueling day to day routine of a farmer and his daughter as she dresses him every morning, tends to the horse, fetches water, and cooks their meal of two boiled potatoes. Tarr’s film is a test of your patience just as life is a test of the patience of his farmer and daughter characters. It is a visual embodiment of Friedrich Nietzsche and his writings. Aesthetically the film is flawless. It’s portrayed in black and white perfectly as we are constantly shown a transition of a dark farmhouse with an open field with the wind blowing and dirt flying everywhere. As I said, there are only 30 shots in the film so the camera is constantly moving around its subject as the scene unfolds not blinking an eye. As the film wears on you start to feel the dread and blackness that the characters feel and some of the more haunting images I’ve ever seen come out without really exposing themselves too much. It’s that powerful of a film. If you want a challenging film that rewards the viewer for their patience by delivering a one of a kind experience then check out this film. It’s as important as it is grueling and unrelenting in its reality towards humanity. 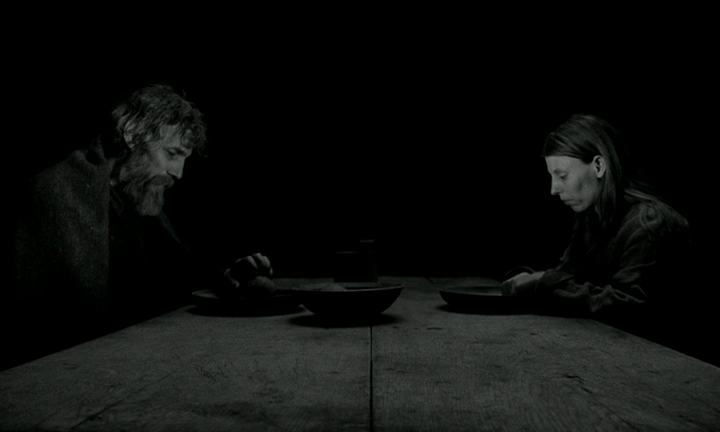