10 years after a global economic collapse, a hardened, ruthless ex-soldier tracks down the men who stole his only possession. As he travels through the lawless Australian outback, he takes a damaged young man as his unwitting accomplice.

A while back I wrote about the work of David Michôd. The man is responsible for one of my favorite films in the last ten years, Animal Kingdom, and after delving into his short film work and the movie “Hesher”, which he scripted, it’s safe to say he’s one of my favorite directors working today. Once I found out that The Landmark Sunshine theater in NYC was going to be getting the film a week before it’s widely released, I had to shoot down and see it. The auditorium wasn’t packed, but had a substantial amount of people in it. I made a joke to one of my friends that there were going to be women in there that were only present to see them some Robby Patt (Yes, I just made that up) and fuck me were there actually a group of girls in there that were very keen on making that fact known. I couldn’t believe it. That’s dedication guys. It’s also quite sad. Those girls did not like the movie I’m sure. I however, loved it. All my waiting and anticipation paid off because the film ended up being exactly what I wanted, a challenging and laboring work that will be both loved and hated by audiences. That is my kind of party.

The story is set in the future but there are no flying cars or androids. Without being told what happened, Australia’s economy has collapsed and spun the country into a state of free for all lawlessness with the only form of “police” coming from either rogue military groups or paid mercenaries. It’s a baron wasteland even worse than what the country was before…a baron wasteland (Please don’t hate me Jordan/Eddie). We meet a man who is given no name throughout the film, played by the outright vicious and brutal Guy Pearce. His car is stolen and he is going to get it back. Along his chase of his vehicle he runs across Ray, the brother of one of the men who stole his vehicle, played by an almost unrecognizable Robert Pattinson. Those ladies must have shit a brick when they saw his face because the heartthrob vampire was transformed into a simple, dangerous, broken, and outright ugly kid. What follows next can really only be experienced in the cinema so I’ll leave that to you.

Disregarding my joke before, I have the utmost respect and fascination with the country of Australia when it comes to film. The work coming out of there in the last few years has just been outstanding. David Michôd has stood out among the crowd and with the completion of this film, totally formed a fresh pair of eyes on the way we watch movies. He sculpts his films with meticulous care and attention while also having the skill to leave the audience in a state of utter confusion. I’ll be honest, I fought with this film. I went from loving it, to questioning it, to being shocked, to being underwhelmed, to being overwhelmed, and finally floored by the ending. The crowd I was with seemed to be going through this battle with me. As the credits rolled, groans were heard, sarcasm was spoken, but some butts, including mine, were glued to their seats. The ending was a bow on top of a mystery box that I’m sure was on the laps and minds of everyone in the theater. Why was this man doing this…for a car? Why would he go through such hardship to get his shitty four door sedan back. To be honest, I had given up hope that we would find out but the haunting final shot clued us in to what motivated a man with little to no motivation left in his life. It was a beautiful way to end a film that was so bleak and disturbing.

The film did have some flaws though. For one, the narrative was a bit clumsy in parts. That is, tense moments of horror and violence were often followed up with transition scenes that kind of killed the emotion of what just happened. There is also a terrible, terrible, use of a song in this film that just distracted and confused the entire theater. It may have been used to illustrate the mental capacity of Pattinson’s character, but it just seemed way too out of place.

Speaking of Pattinson, holy shit can that kid act. I have never seen a single Twilight film nor do I have any interest i ever seeing, but this kid is special. I remember seeing Cronenberg’s “Cosmopolis” and being teased in what Pattinson could possible achieve later in his career. This film should be his break. If he was given a supporting actor nomination, I wouldn’t bat an eye. He perfected the thousand yard stare. He nailed an almost unintelligible accent. He stole every scene he was in and that was hard when realizing mostly every scene he was in was with Guy Pearce, who in my opinion gave the performance of his career. The both were powerhouses in a film with both power and unrelenting dread. They should be applauded for their work.

David Michôd crafted a beauty of a film. Each shot is crafted so well with full detail that it’s hard to not find the hell that the film was set in beautiful. The rolling hills played like a second character as we are reminded in nearly every shot that there is something bigger than us and that if we are not careful, we will fall. The score, when not being played on the radio by Pattinson, was eerie and dark as the violence carried out. It kept me glued to the screen waiting for what was going to happen next even though I was sure nothing was around the corner. It was an immersing and unflinching watch in where even if you don’t buy into the film, you can still be entertained.

Overall it was a slightly flawed, but nearly brilliant film by David Michôd. The last twenty minutes or so, including that ending, was some of the best film making I’ve seen in a long time. It’s a film that will be talked about and debated on whether it is too pretentious and whether or not it takes itself too seriously. Much like Animal Kingdom, which is slightly the superior film as of now, The Rover requires multiple viewings to fully digest but it’s a wonderful thing when something can get so much use.

For the record, I did not come up with the synopsis. Three dumb guys? Yes, well they’re dumb, but come on IMDB you can do better than that.

I’m a huge, HUGE fan of The Assassination of Jesse James by the Coward Robert Ford. The film was just a perfectly paced, photographed, and told story and was a perfect piece to complete the trifecta to No Country for Old Men and There Will Be Blood. If you ever have eight hours to kill, a marathon of those three films is really cool. I’m also a fan of his first film which is the vastly underseen Chopper with Eric Bana. Dominik wrote the screenplay for his newest film based off a novel by George V. Higgins called “Cogan’s Trade”. It ended up being a very conflicted watch for me.

First of all this is a wonderfully cast film. Every single dude in this movie is awesome and it was great seeing them all work together. Mendelsohn ended up stealing every scene but I’m a huge fan of his ever since I saw him in Animal Kingdom. We get a very small but great dose of the late Gandolfini and Pitt was fun as his smart albeit very cynical gangster. I also thought it was a very well shot film with a CRAZY ASS death scene in the middle of the film utilizing slow-mo and CGI that looked great when usually it looks like a bag of crap. The film, which is mostly a dialogue driven film kept my attention the entire time but I may have to admit it was mostly due to the fact that I loved seeing all these actors on screen with each other.

I don’t know what the message was supposed to be. Capitalism is bad? No seriously, that’s the message. I know this because it was SCREAMED at my face for the entire time. It was not subtle in any way. For a film called Killing Them Softly, there was nothing soft or subtle about the way they got their point across. It was also a highly cynical and dark film which is fine when it fits the character but Brad Pitt’s Jackie just seemed to be preaching from the mouth or Dominik most of the time. It got old. I’ve always been a fan of a slow burn so that aspect didn’t bother me at all. It also ended VERY abruptly without tying anything together. It’s almost like they ran out of money. It just didn’t sit well.

Overall I enjoyed the film and it looked great, especially that scene I mentioned earlier. It’s a short 90 minute film so I’d say take a chance on it. The cast is amazing and the directer is promising. 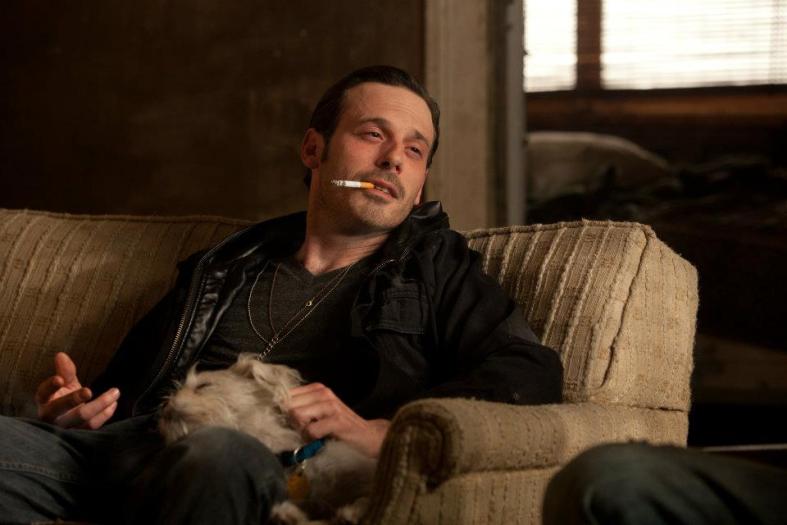